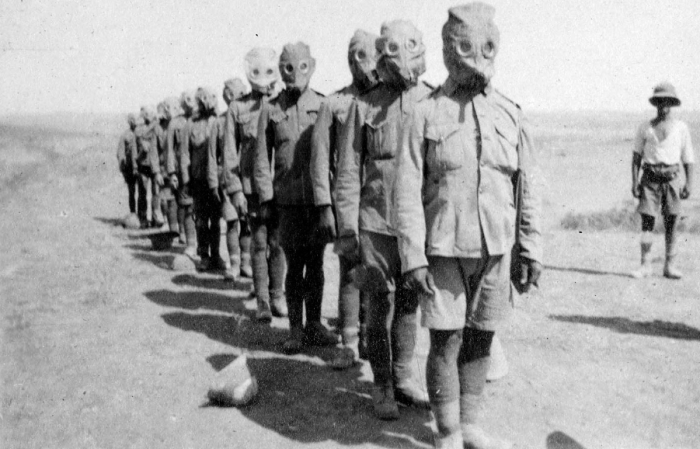 Men undergoing gas mask training in the desert. Gas would be a weapon used at the 2nd Battle of Gaza.

The 19th April 2017 sees the 100th Anniversary of a battle fought in Palestine that I consider the Norfolk Regiment’s first day on the Somme. By that I mean the amount of casualties incurred in one day were terrible and affected communities all over Norfolk.

Two men from my village were killed in that battle.

James Robert Watts was born in 1889 and was the son of Jonah and Elizabeth Watts who were residing in Westwick when war was declared. He had one brother, Dennis, and a sister called Jane. Looking at records it looks as though he preferred the name Robert. Secondly, we have George Albert Brakenbury, as we have already discussed, he was the brother of Ernest Brakenbury and was born in 1894.

Robert and George had both joined the Norfolk Regiment and had both become Territorials. George can also be dated to being at Gallipoli at the same time as Thomas Self and Cecil Bullimore as all three landed at in that theatre of war on the 6th August 1915. In fact Thomas and Cecil had joined the battalion on 17th February 1911 and their service numbers are only 8 digits apart. Robert would have joined up in November/December 1914 due to his initial 4 digit service number.

George was part of the 1/5th Norfolks and James the 1/4th Norfolks. James must have been a replacement for men lost in late 1915 as he did not reach the battalion until, at the very earliest, January 1916 as his MIC does not record a date of entry into theatre.

Following the failure of Gallipoli the 54th (East Anglian) Division had withdrawn from there between the 3rd & 8th December 1915. By the 18th December the 54th Division was positioned around Sidi Bishr near Alexandria. By the 2nd April 1916 they had refitted and took up position around No 1 (Southern) Section on the Suez Canal. The area around the Suez Canal was, during the Great War, part of the Ottoman Empire and the war against Turkey was continued here in what is today known as Palestine. The Turks in this region, as they had been in Gallipoli, were advised and supported by Germany. However, this area stretched as far as Egypt, Saudi Arabia, Syria and Iraq showing you that history repeats itself.

The word ‘Jihad’ is not a new word when it comes to fighting against British troops in a holy war. Both Turkey and Germany had ensured that they fuelled this type of war by enlisting the assistance of various Arab tribes including a group called the Senussi. During 1914 and 1915 the British had fought defensive actions against the Turks and the Senussi who had tried, and failed, to capture the Suez Canal. As with today’s strategy, the Suez Canal was vital to the whole region and this stretched to the area around it, namely Gaza, Jaffa and the Jordan Heights.

If is had not been for this vital waterway then supplies of men, materials and food would not have been able to travel through here from Australia, India and New Zealand.

The British also had the support of Arab tribes from the Hejaz region and by 1917 it was deemed viable that Palestine could be captured and that Germany might be defeated in this region, which would mean a less costly war of attrition than that of the Western Front. And so the British high command, led by Major General Charles Dobell and General Archibald Murray, looked at an offensive around Gaza, which was, and still is, a strategically important town on the coast of the Mediterranean Sea.

The first battle, fought on the 26th March 1917 had been a costly failure when the British troops were withdrawn when in reality they could have captured the Turkish positions along the Gaza-Beersheba Line. And so a second attempt was planned for April. But by then the Turks had bolstered their defences and were ready for another attack.

The battle had been planned on the fact that the commanders believed that a quick resumption of hostilities in the same area would bring a quick and successful victory. Murray and Dobell had also informed the War Office that the first battle had been a complete success, this was not so.

Four divisions, known as the Eastern Force were put into the line, these were the 52nd (Lowland), 53rd (Welsh) and 54th (East Anglian) and the recently formed 74th (Yeomanry) Division. There would also be a mobile element made up of the Anzac Mounted Division, the Imperial Mounted Division and the Imperial Camel Corps Brigade.

British trenches prior to Gaza

Dobell planned to make the battle a more like the Western Front by utilising a two-day preliminary bombardment and by using gas and tanks.

‘Dobell’s plan was simple. The infantry divisions wcre to crush the enemy on his main position around Gaza, while the mounted divisions pressed back his flank towards Beersheba, prevented the withdrawal of reinforcements from there to Gaza, and held themselves in readiness for the pursuit. In the infantry attack the 52nd Division was to assault Ali hfuntar and its surrounding defences, while the 54tIi, crossing the Gaza-Beersheba road on the right of the 52nd, was to capture the enemy’s works at Khurbet el Bir, and then swing round and seize Anzac Ridge. At the same time the 53rd was to attack to the south-west of Gaza on the sand-dune sector between Samson’s Hill and Sheikh Ajlin on the west. It was therefore a plain frontal attack against the full strength of the great Gaza position, and the adoption of such a scheme is conclusive evidence of the remarkable confidence of Murray and Dobell.’

From the Australian Official History

Only eight tanks would be available and the use of gas was met with great concern from the local commanders, which prompted one commander to say,

“That, gentlemen, is the plan, and I might say frankly that I don’t think much of it”

I cannot really verify this but what I do know is that if the officer made that comment he was prophetic because his concerns were founded. 2,000 gas-shells specially shipped from England would be available for the battle and would be freely used against Ali Muntar.

Secondly, as previously mentioned, the Turks had had ample time to build up their defences and it was estimated that they could bring to 25,000 men to the battle and the area was defended by the Fortress at Gaza and Ali Muntar and, to the east, a number of redoubts on the ridges overlooking the area called Tank, Atawineh, Hareira and Sheria.

The Western Front style bombardment started on the 17th April 1917 and was assisted by the British and French Navies. However, this artillery engagement cannot be compared to that of the Western Front. It was too weak and too little for the time period and only helped to provide the Turkish defenders with ample warning that another attack was about to take place. On the morning of the attack the artillery concentrated on the fortress of Ali Muntar and it was here that gas was used. 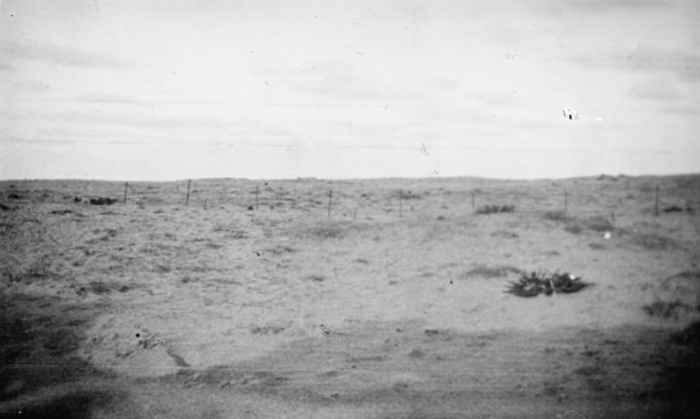 The order of battle was as follows:

The 53rd Division was to advance on the extreme left of Gaza using the Mediterranean shore as an aiming point.

The 155th and 156th brigades of the 52nd Division were to attack Gaza centrally and also take Ali Muntar.

The 162nd and 163rd Brigades of the 54th Division would attack to the right of Gaza and the Tank Redoubt.

The 74th (Yeomanry) Division would remain in reserve.

All through the preliminary two day bombardment the Turks had been able to pour counter battery fire onto the British lines causing casualties on the infantry who were forming up for the attack and as the attack started they were able to do the same as the three divisions started their advance.

In Part 2 we will look at what happened during the battle.

7 thoughts on “The 2nd Battle of Gaza”